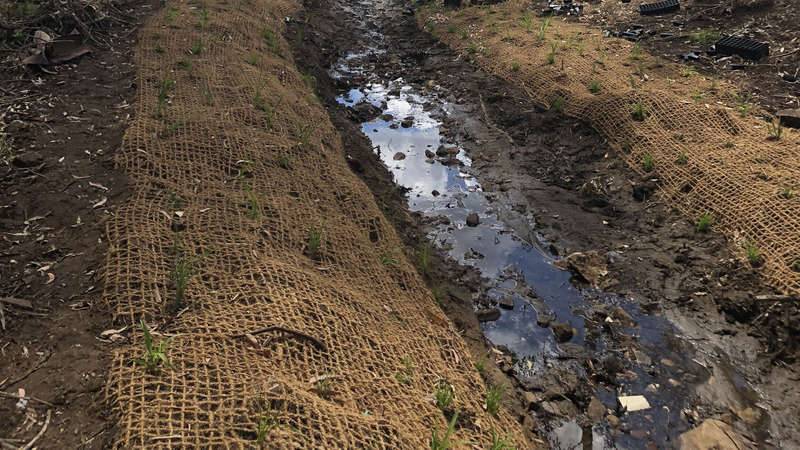 An enormous amount of work has been completed during the first year of the Simmos Beach catchment restoration project, funded by the NSW Environment Trust. The project has focused on rehabilitating the riparian area of a small un-named creek that flows to Simmos Beach on the Georges River.

Following Stage 1 works, areas once infested with dense stands of woody weeds and madeira vine are now regenerating with native species, increasing the habitat suitability for animals such as koalas which have been spotted on the site. A number of nesting boxes have also been placed in remnant eucalypts to encourage more wildlife to the site. Contractors have been busy treating woody weeds such as large leaf privet and cockspur coral trees as well as madeira vine and other herbaceous weeds. A number of sediment slugs have also been removed from the creek line, improving flow to the Georges River. Corrective Services in partnership with Georges Riverkeeper have removed rubbish from 4.14 hectare of the reserve ensuring it does not enter the Georges River at Simmos Beach.

Campbelltown City Council Bushcare has been instrumental in the delivery of the project. Bushcare volunteers have helped out by undertaking primary woody weed removal in the project area in addition to their work improving the condition of adjacent bushland, home to endangered flora including the Sydney Plains greenhood orchid, nodding geebung and the small-flower grevillea. Events such as the plants, pests, water and wildlife workshop and the Simmos habitats walk, run by Bushcare officers have increased community engagement in the project and protecting our local bushland.

Get in touch with Campbelltown City Council Bushcare if you would like get involved with restoration works or community workshops during stage two of the project. For example, a community planting event is being held 9 am to 12 pm, Sunday 23 November at Fifth Avenue Reserve where residents can help plant 1,000 plants and replace weed trees with native species.

Before and after photos

Before the project started woody weeds such as small leaved privet (pictured) were dominant, during rain their seeds could travel downstream causing the weeds to spread into good quality bushland.

(Also pictured) the same area after woody weeds have been treated; natives such as the melaleucas present in the photo now have a change to regenerate.

Scratches and claw marks on the trunk of grey gum. Evidence that koalas have been visiting!