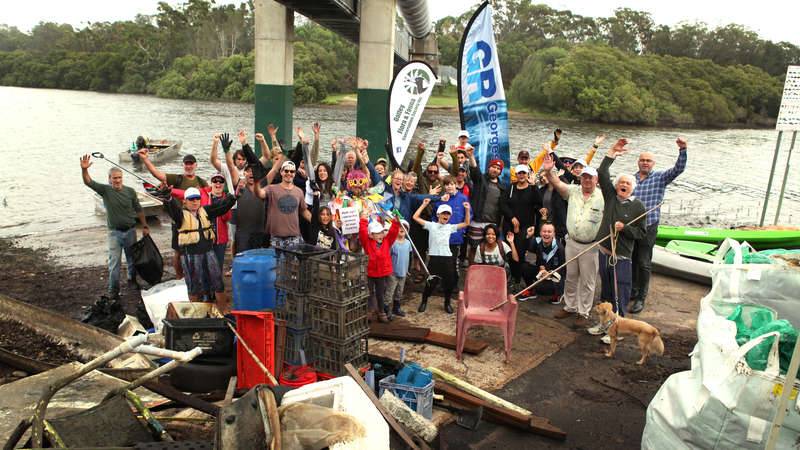 This community day was held as part of a broader clean up conducted by Ocean Crusaders and Georges Riverkeeper, funded through the office of David Coleman MP and the Federal Government’s Communities Environment Program, that removed a total of 10.9 tonnes of rubbish from the river over a 7 day period.

Ian Thomson, the founder of Ocean Crusaders, a charity organization with a focus to remove marine debris from Australia’s waterways said, “It’s heartbreaking to see so much debris in such a beautiful waterway, however it’s also great to see so many people willing to play their part in making a difference.  In reality we need to stop using single use plastics and hence our campaign motto is to ‘Stop it at the Shop’ by encouraging people to stop buying it in the first place.”

David Coleman, the Federal Member for Banks, says: “The Georges River is the jewel in the crown of our local area and we should do everything we sensibly can to ensure that it remains that way. This is a great initiative and all the volunteers and those involved should be congratulated.”

Georges Riverkeeper Chairperson, Councillor Geoff Shelton said, “Plastic pollution is degrading our waterways and killing our wildlife. We are very grateful to Ocean Crusaders who have travelled from Queensland to use their time, expertise and equipment to help clean up the river.”

Councillor Shelton explained that Ocean Crusaders partnered with Georges Riverkeeper for the community event at Salt Pan Creek which was supported by Georges River Council and City of Canterbury Bankstown as well as Oatley Flora and Fauna and The River Canoe Club.

Georges River Council Mayor Kevin Greene said, “Congratulations and thanks to our community volunteers who gave up their time and came out in kayaks and on foot to rid the river of debris.”

City of Canterbury Bankstown's Mayor Khal Asfour said: “Plastics don’t fully degrade, they just break up into small pieces that persist in the environment and enter food webs, and so removing plastic from the river makes it both safer and more enjoyable.”

The community event was held in addition to 6 days of “hard-core cleaning” by Ocean Crusaders and smaller groups of volunteers using a custom-built, 7 metre barge on the river.

Last financial year, Georges Riverkeeper helped to remove 110 tonnes of rubbish from the river, and this year alone has removed over 60 tonnes already.

These amazing people collected about a tonne of rubbish using canoes, kayaks, paddleboards and on foot with gloves and pick up sticks. Thank you to Ocean Crusaders, Oatley Flora and Fauna, The River Canoe Club, Georges River Council and City of Canterbury Bankstown for helping to make this Clean Up Australia Day event a success.

After recent rain, Oyster Creek Gully in Sutherland Shire is looking stunning, with a lovely flow of water bubbling down the boulder-lined creek.

The rain has also led to an influx of annual weeds which is keeping the contractors working as part of our Oyster Creek Gully Restoration Project busy, for the time being.

The Georges River is one of the major water catchments in the Greater Sydney Region. While we’re experiencing less rain at the moment, the river does have a history of flooding.