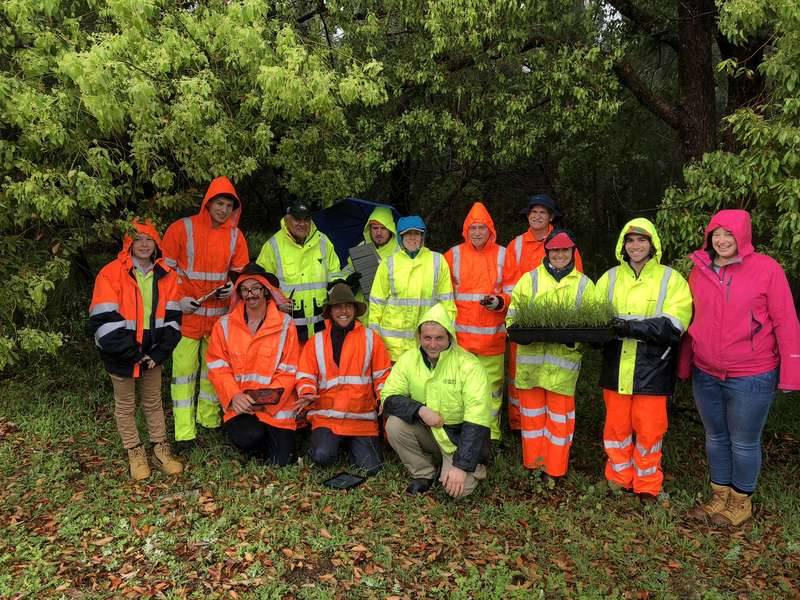 With the help of Georges Riverkeeper and City of Canterbury Bankstown, Conservation Volunteers Australia volunteers braved the rain to begin revegetating at Little Salt Pan Creek in the Georges River catchment with over 3,000 Sporobolus virginicus seedlings.

Haven’t heard of S.virginicus? Its common names include Sand Couch, Salt Couch and Saltwater Couch. But whatever you call it, it’s an incredibly important plant species found in intertidal areas.

Regional Coordinator for CVA Greater Sydney, David Jones explained: “Sporobolus virginicus has been identified as key source of habitat and food, supporting a wide range of different species, like algae, snails and crabs. In turn, this can have a positive flow on effect for populations of fish species. Think of Sporobolus as a gracious host, putting on an all-you-can-eat buffet for all the crabs, prawns and fish living in the Georges River.”

Georges Riverkeeper Manager, Beth Salt says, “Once abundant in the Georges River ecosystem, plant numbers have declined significantly due to the impacts of urbanisation. This program will replant the habitat, at six key sites in the Georges River catchment, ensuring higher fish stock numbers, and a stronger, more sustainable food web.”

Mayor of the City of Canterbury Bankstown, Khal Asfour, welcomed the project.

“Planting along the Georges River at locations, such as Little Salt Pan Creek in Padstow, gives nature a helping hand,” Mayor Asfour said.

The volunteers will continue planting at Little Salt Pan Creek on Thursday 19 October and Friday 20 October, before moving on to six additional sites, located throughout the Georges River catchment, over the next few months. Interested in joining in? Register here.

There is now an interactive map to show you where to walk, cycle, swim, fish and boat along the Georges River, and you’re invited to contribute your favourite walks and lookouts.

Georges Riverkeeper Chairman, Geoff Shelton, said: “The Georges River is over 100 km long so it can be difficult to know where the best spots are to enjoy the river.”

Hooked on a feeling!

Volunteers are revegetating Chipping Norton Lake to feed fish in the Georges River.

Thousands of baby Sporobolus plants have been planted along the southern foreshore of Chipping Norton Lake by Conservation Volunteers Australia, with the help of Georges Riverkeeper and Liverpool City Council.