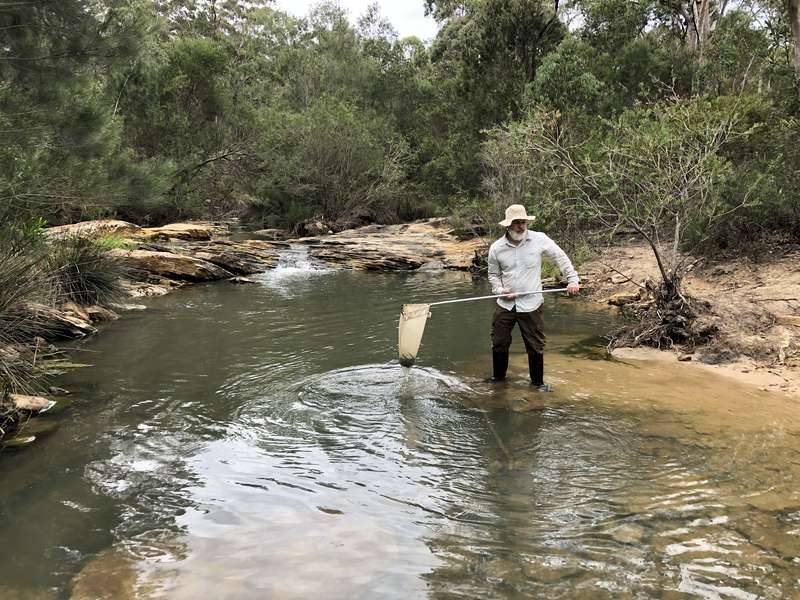 The waterbugs (freshwater macroinvertebrates) are very useful for determining the condition of the waterway from which they were collected. This is because waterbugs occur everywhere, they are relatively easy to catch (e.g. much easier than fish), they are very diverse and different types of waterbug vary in their sensitivity to pollutants and other disturbances owing to human activities impacting waterways. That is, some waterbugs are very sensitive and others are far more tolerant of impacts to waterways (see this handy waterbug guide for more information). Highly impacted waterways will only have tolerant waterbugs, which differs from the occurrence of both sensitive and tolerant waterbugs in unimpacted streams.

A net with fine meshing can be used to collect small-bodied waterbugs. The waterbugs can be identified in the field, but some waterbugs are challenging to identify without viewing them under a microscope. For our River Health program, rather than taking the entire sample back to the laboratory, we used the established method of doing a standardised 'live-pick'. The advantage of live-picking in the field is that it is much easier to see small waterbugs when they are moving, so they can be collected from amongst the leaves, twigs, algae and sediment that are picked up in the net. This allows for a relatively uncluttered sample of waterbugs to be taken back to the laboratory for more thorough examination. In both spring and autumn we collected waterbug samples across 34 freshwater sites, which will be used to grade ecological condition and determine the state of the river in a report to be issued later this year.

Waterbugs, or freshwater macroinvertebrates, are small creatures that live in freshwater for either all or some of their lives. By looking at the type and number of water bugs in our waterways, we can tell how healthy the waterway is. Dr. David Reid from Georges Riverkeeper shows how to do a 'live pick' of waterbugs from a water sample.

Annually, we conduct AUSMAP sampling along the Georges River foreshore to see what areas are the most contaminated with microplastics. What is AUSMAP? It's a national citizen science project called the Australian Microplastic Assessment Project.

Recently, on the river...

The trusty (and slightly rusty) Georges Riverkeeper boat has shown her utility over the past few months. We have been out on the water regularly assisting Member Councils with a number of jobs along the river.

From the freshwater to the mouth, here are a few of the adventures we've had.