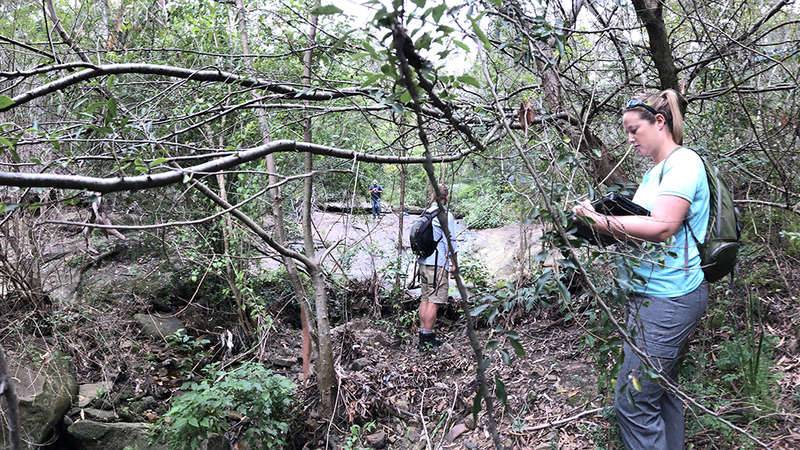 The Rehabilitation of Oyster Creek Gully Habitat corridor has progressed well during the first stage of the NSW Environment Trust funded project.

Walking down through the riparian area it is evident that contractors have been busy treating invasive woody weeds such as small and large leaf privet, lantana and Acer nagundo as well as climbing weeds such as blackberry and honey suckle. Removing these species gives existing native riparian vegetation a chance to regenerate, eventually connecting better patches of bushland. It also reduces the threat of weeds invading the near pristine areas of bushland on the upper slopes of the gully. In areas that lack native vegetation cover, due to high densities of weeds, there is limited chance for natives to regenerate. These ‘low resilience’ areas have been revegetated with native species after weed removal has occurred.

During Stage 1, contractors have put in a huge 306 hours of bush regeneration, completing primary woody weed removal in approximately 1.89 hectares of the riparian corridor as well as additional weeding sweeps through the better areas of bushland. 250 native trees, shrubs and ground covers have also been installed during Stage 1.

Bushcare volunteers contributed substantially to the project under the guidance of Sutherland Shire Council Bushcare Officers. At the two Bushcare sites in the project area at Surrey Place (Kareela) and Anemone Place (Kareela/Kirrawee/Jannali), volunteers have been busy removing weeds and assisting the natural vegetation of the bush. In addition to Bushcare volunteer days, a number of Bushcare/Georges Riverkeeper events are planned for the second year of the project. Anyone interested in helping in the rehabilitation of the Oyster Creek Gully habitat corridor should get in contact with Bushcare on the Sutherland Shire Council website.

Before and after Stage 1

Photos show the riparian area adjacent to Oyster Creek before the project had started. The area was infested with woody weeds such as small leaf privet and covered by invasive balloon vine.

The other photo shows the same area at the end of stage 1. Woody weeds and balloon vine have been removed, native plants smothered by weeds are able to now grow. Additional plants have been installed to aid native regeneration.