#SeaToSource is a Conservation Volunteers Australia initiative, supported by Georges Riverkeeper, that tackles litter at its source, before it reaches our waterways.

#SeaToSource, a Conservation Volunteers Australia initiative, is helping to act on one of the world’s most solvable environmental issues – ocean litter.

The project and its partners and volunteers are committed to reducing the amount of plastic litter entering our creeks, rivers and oceans and causing harm to the animals that call these places home.

#SeaToSource is a project powered by Conservation Volunteers Australia and supported by Georges Riverkeeper. We'd like to invite you to attend the biggest event yet, the National Day of Action, on 23 April, 2022. 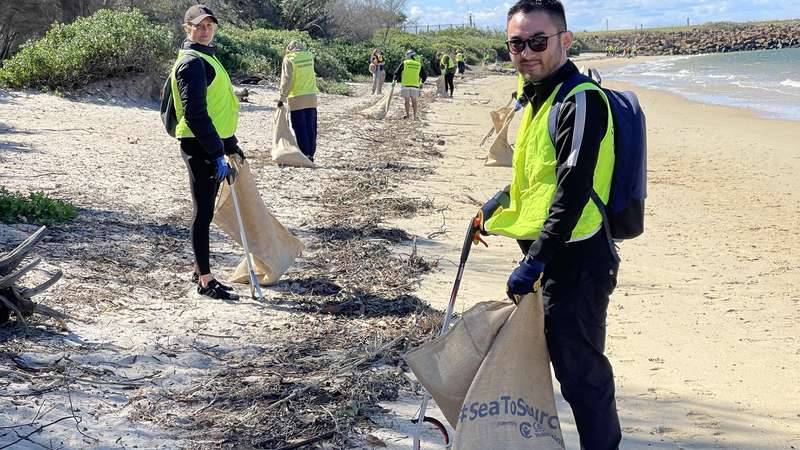 Plastic accounts for around 60-95 per cent of the litter in our waterways and oceans, causing a wide range of environmental issues. This program looks at the source of litter, which can be our rivers and creeks.

As part of #SeaToSource, CVA is showcasing eight rivers and urban waterways around Australia, including the Georges River, and sharing stories about their importance to the local environment and threats the rivers are facing from plastic litter.

#SeaToSource aims to involve communities around Australia to tackle litter at its source, before it reaches our waterways, and ultimately to protect the Great Southern Reef which stretches from Western Australia to Queensland and includes the full New South Wales coast.

The Georges River has a large amount of plastic pollution, which flows from the river into the sea, polluting the water and harming wildlife and the environment.

If you’d like to get involved in #SeaToSource, head over to the website for more details and information about what you can do to be part of the project and reduce ocean litter.

We are inviting everyone who cares about tackling plastic litter to get on board and share their stories about time spent on the Georges River. You can also take part in a monthly clean up, alternating between the last Thursday and Saturday of each month, see the website for details.

Sea To Source is supported by the Australian Government under the Environment Restoration Fund.